Unknown 9/04/2014 05:32:00 am
A Gold British Trade Dollar sold for US$236,000 (including buyer premium) at Hong Kong Coin Auction 57 by A.H. Baldwin & Sons Ltd and auction partner Ma Tak Wo Numismatic Co Ltd on August 21st 2014. The extremely rare gold coin is a Johanna Austin Collection, who had a particular interest in trade coins. 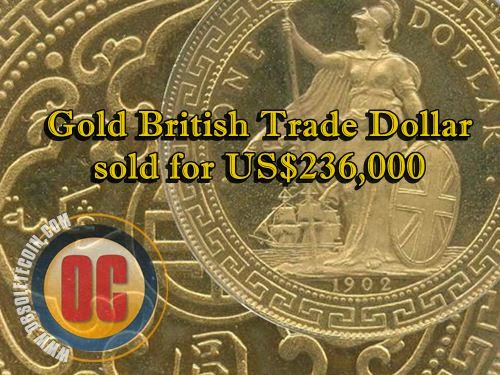 This coin is minted by Bombay Mint, India with the mint mark "B", located in the center prong of the trident. It is an ex Spink auction 94, 14 October 1992, lot 809 and come in a PCGS holder graded PR64DCAM. This coin is the best preserved coin of its type known to exist.


The British Trade dollar was declared legal tender on 2 February 1895 by an Order of Council in the Straits Settlements, Hong Kong and Labuan (off the north-west coast of British North Borneo). It is a British coin with an eastern look. The only British character of the coin is Britannia standing helmeted looking to left with her right hand grasps a trident and her left hand resting on an oval sheild.

All gold proofs were specially struck at the request of a private individual who supplied the necessary bullion and paid the prescribed minting charges. They are more correctly referred to as proof restrikes, of which as few as six are thought to exist.


The proceeds of the sale of Johanna Austin's collection will go to the Museum of East Asian Art in Bath, England.