Unknown 9/14/2014 06:54:00 am
Before the arrival of James Brooke, Sarawak was under the rule of Brunei. On 1839, when James Brooke arrived in Kuching with his private warship, he found out that Sultan of Brunei, Sultan Omar Ali Saifuddin II faced a major rebellion led by Pengiran Indera Mahkota. Particularly the settlement around the gold mining areas were facing an uprising against the Brunei ruling from native Dayaks and the Malays. James Brooke helped Pengiran Muda Hashim the Uncle of the Brunei Sultan, to suppress the rebellion. He called in the British Navy to suppress the local pirates, who were supported by the Sarawak rebels. 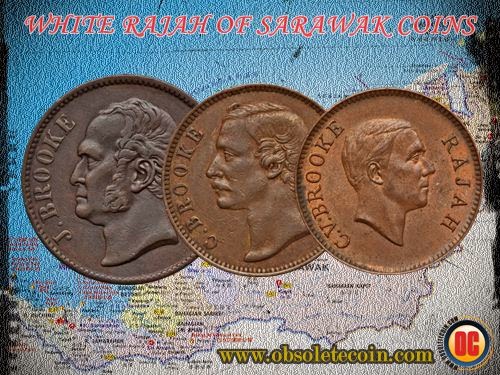 On 24th September 1841, Pengiran Muda Hashim bestowed the title Governor to James Brooke in return for his help. At first, the Sultan of Brunei don't support the idea of James Brooke as a Rajah of Sarawak. After waiting for almost a year, James Brooke warns the Sultan by aiming his cannons at the Sultan’s palace in Brunei and with an alliance of Dayaks behind him. The move has change the Sultan mind and Sultan Omar Ali Saifuddin II granted James Brooke the title "Rajah of Sarawak", officially making him governor and ruler of Sarawak in August 18, 1842.


On 6 July 1846, British attack Brunei after the massacre of Pengiran Muda Hashim by the Sultan men. Brunei lost the war and Sultan Omar Ali Saiffuddin had to flee to Damuan. Subsequently Sultan Omar Ali Saifuddin II was forced to sign a treaty to end the British occupation of Brunei Town.


Due to British pressure, Sultan Omar ‘Ali Saifuddin II also ceded Labuan to the British under the Treaty of Labuan signed on 18 December 1846. James Brooke was subsequently knighted and appointed as the first British Governor of Labuan in 1847.


Between 1853-1905, Brooke family managed to suppress more rebellions and their territory rapidly developed to the size of present Sarawak state. 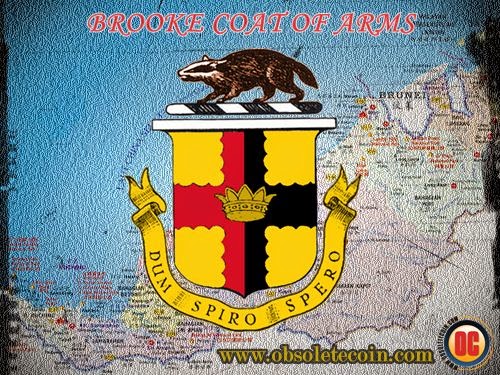 Brooke Coat of Arms
The arms made use of were those granted to Rajah Sir James Brooke, K.CB. He died without issue and was succeeded as Rajah by his nephew, H.H. Rajah Sir Charles Johnson Brooke, G.C.M.G. (originally Johnson), who adopted the name of Brooke and the arms of his uncle. These arms are : " Or, a cross engrailed per cross indented azure and sable, in the first quarter an estoile of the second. Crest— On an Eastern crown a brock proper ducally gorged or. Motto—" Dum spiro spero." The Rajah flies a yellow forked flag, charged with a cross per pale sable and gules charged with a crown and with the red lateral arm of the cross extended saltirewise to each point of the fork. The motto, Dum Spiro Spero which means "While I Breathe, I Hope." 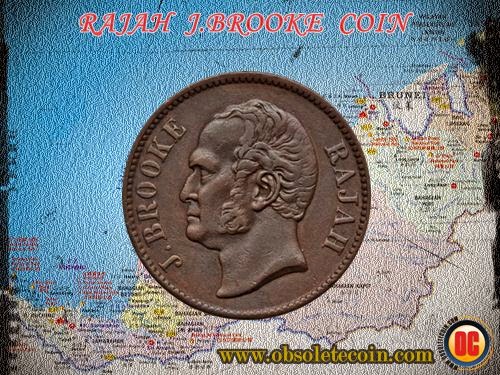 
James Brooke start to introduced Sarawak coinage soon after the Sultan announced him as a Rajah of Sarawak in 1842. With help from a trading company based in London and Birmingham, Messrs Smith & Wright, he ordered a quantity of kepings from a small private mint in Birmingham.


The first Sarawak coin is a keping token which show the badger or brock on the obverse, derived from the crest of the Brooke Coat of Arms, under it are the initials J.B. (James Brooke) and the date SEPt 24 1841. The coin reverse was struck from an old worn out die bearing the denomination "satu keping" (one keping) in Arabic and the date 1247A.H (1831) which had been used earlier for the striking of the Singapore Merchant Token.


They were struck in copper or brass, the later being the scarcer variety, although both versions are rare. Counterfeit of the Sarawak 1841 keping came on to the market in 1971 and have since caused many a headache to collectors.


Many people believe that the token is to commemorate the day James Brooke received the land and title "Rajah of Sarawak" from Pengiran Muda Hashim.


When James Brooke returned to England in 1863, he was knighted by Queen Victoria and Britain recognized Sarawak as an independent state. He also returned to England to order a full series of Sarawak coins. He arranged for copper coins with the denominations of 1/4, 1/2 and 1 Cent to be struck in Ralph Heaton Mint (now known as the Birmingham Mint) with the help of his British agents Buchanan, Hamilton & Co. The dies for these coins as well as the later copper coinage of 1870 were engraved by Joseph Moore. Heaton won a contract which was to last until the Japanese overran Sarawak at the end of 1941.


James Brooke never married and don't have any children. When he died in 1868, the throne went by edict to his nephew, Sir Charles Johnson Brooke. 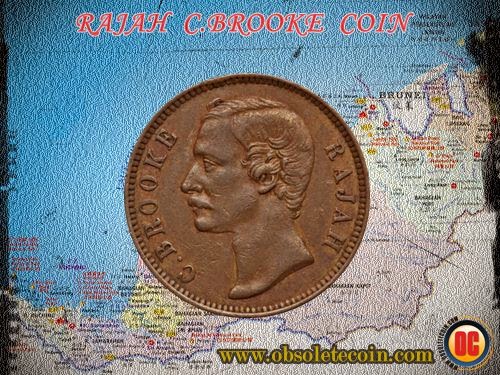 
The copper coins with the denominations of 1/4, 1/2 and 1 Cent were minted by R. Heaton & Sons, Birmingham. These coin followed the previous design on James Brooke Copper coins. The date 1870 appeared on the reverse, although the coins were not actually issued till the following year.


During Rajah Charles Johnson Brooke’s rule, the State of Sarawak was placed under British protection in 1888 and the governor or the Straits Settlements was appointed Agent of Sarawak. As a protectorate of Britain, Sarawak gained a parliamentary government. Investment in state infrastructure included a railway and the development of natural resources after oil was discovered.


In 1891 the export of the coins of Sarawak was forbidden due to the complaints by the Straits Settlements Government. As a result, from 1892 until 1897 new copper 1 cent coins with a centre hole and a smaller portrait of the Rajah were released, to avoid confusion with the Strait Settlements coins.


In 1889, responsibility for ordering the coins was transferred to the British North Borneo Company in London and henceforward the coins were impressed with the H mint mark of the Heaton Mint. Thus the cent dated 1889 exists in two versions, with or without the H mint mark which appears on the reverse, below the ribbon of the wreath. Some 3,210,000 cents were struck that year, equally divided between those with and without the mint mark. All of the cents issued in 1890 had the mint mark, but in 1891 only about two-thirds of the mintage (1,623,888 in all) bore the letter H, while the others were unmarked.


The silver coins are scarcer than the copper issues due to a mintage under 200,000 per issue for the series and a low survival rate as a result of the melting of almost all of the Sarawak silver obtained by Japanese during their World War II occupation. 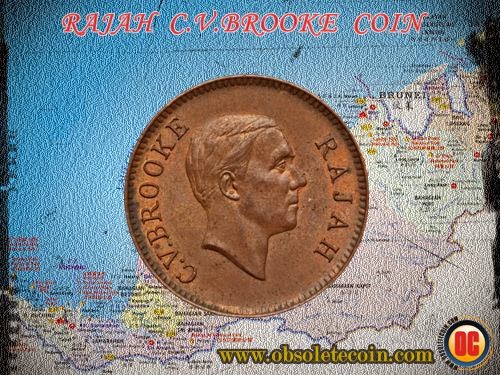 
Due to the scarcity of silver after the 1st world war, copper-nickel coins were authorized in 1921. Silver continued to be used in the production of 20 and 50 cent pieces in 1927, but at a .500 fine standard.


The Royal Mint’s annual report indicated that 1,002,227 pieces of 1 cent coin were struck in 1942 by the Birmingham Mint Ltd. However, no one cent coins dated 1942H have so far been traced.


Rajah Charles Vyner Brooke and his family were in Sydney, Australia when Japan invaded Sarawak in 1941. He was forced to remain in Australia for the duration of the war as Japan held Sarawak until 1945. Charles Vyner Brooke was finally able to return to Sarawak on April 15, 1946, where he resumed the title of Rajah. Sarawak had been ravaged by war and needed the finances to accomplish major reconstruction. Charles accept healthy pension offer from the British Government, ceded Sarawak to the British Government on July 1,1946, as a crown colony.


Besides the silver, another numismatic casualty of World War II was the 1941-H bronze cent. It is believed that the ship transporting the mintage of these coins to Sarawak for use in commerce was sunk by the Japanese during World War II. Thus, it is a very scarce coin today. Only about 50 examples of the 1 cent of 1941 are now believed to be in existence.


Following the transfer of Sarawak to the British Crown in 1946, the currency of Sarawak had been under review. Finally on 1st January 1952, the Board of Commissioners of Currency Malaya and British Borneo came into being. In 1953 coins featuring Queen Elizabeth under Malaya and North Borneo were issued and the old coinage withdrawn from circulation in Sarawak.


Source:
-World coins: The coinage of the White Rajahs of Sarawak by Jay Turner.
-British Borneo Sketches of Brunai, Sarawak, Labuan, and North Borneo by W. H. Treacher
-Piracy, Maritime Terrorism and Securing the Malacca Straits edited by Graham Gerard Ong-Webb
-The Milwaukee Journal - Jan 15, 1938
-History of Sarawak Coinage by James A Mackay, Coin Digest, 1989 Vol.2.No.1
-The Encyclopaedia of the coins of Malaya Singapore and Brunei 1400-1967 by Saran Singh.
-The book of public arms: a complete encyclopædia of all royal, territorial, municipal, corporate, official, and impersonal arms by Fox-Davies, Arthur Charles.

White Rajahs of Sarawak Coins History Unknown 2014-09-14T06:54:00-07:00 5.0 stars based on 35 reviews Before the arrival of James Brooke, Sarawak was under the rule of Brunei. On 1839, when James Brooke arrived in Kuching with his private wa...
coin list
History
Sarawak