Unknown 7/11/2013 07:12:00 am
When China lost the opium war also known as the Anglo-Chinese Wars in 1839-1843 and 1856-1860, they're force to open up a number of ports to British trade and residence, and Cede Hong Kong to Britain. At the same time, Straits Settlements were established to link the now-defunct British East India Company's outposts of Penang, Malacca and Singapore. By the middle of the nineteenth century, international trade in Hong Kong and Straits Settlements start to flourished with merchants and adventurers flocked that areas.


Large Foreign silver trade dollar were used for payment before the introduction of an acceptable British Trade coins in Hong Kong and Straits Settlements. Mexican silver dollar-8 reales, United States trade dollar, the Japanese trade dollar and the French "Piastre de Commerce" are some of the common trade dollars used. These .900 fine silver trade dollars were then circulated throughout the East where they were readily accepted as a medium of exchange. 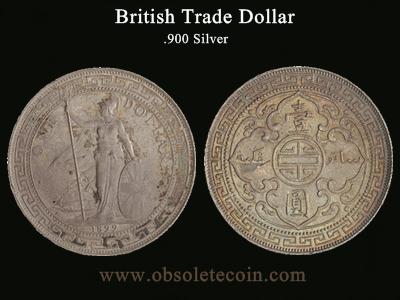 It became necessary to produce special dollar for trading in the British Colony. When price of silver rise rapidly in 1875 to 1895, it disturb trading and resulted a very serious shortage of minted dollars. To overcome the shortage, approval was given in 1894 by a Royal Prerogative of the English sovereign for the minting of a special British Dollar for general use in Far Eastern Trade.


To make sure the new trade dollar can be accepted by countries outside British dominion, learning from the Portcullis Money mistake, the coin had been given an Eastern look. The only British character of the coin is Britannia (posed by Lady Susan Hiks-Beach for artist G.W. De Saulles) standing helmeted looking to left with her right hand grasps a trident and her left hand resting on an oval sheild bearing the united cross of St. George of England, St. Andrew of Scotland and St. Patrick of Ireland surrounded by a Chinese scroll-pattern border on the obverse. A sailing ship is in the distance with the denomination "ONE DOLLAR" above and year date below.


On the reverse, in the centre between the denominations was a Chinese labyrinth, one of the many variations of the Chinese character "shou" for longevity encircled by 4 compartments containing Chinese characters for "Yi Yuan" and Malay Jawi characters for "Satu Ringgit"; all encircled by a Chinese scroll border. The coin had a diameter of 39 mm and was struck in 26.95 grams (416 grains) of 0.900 fine silver. The dies were prepared by London Royal Mint engraver G W De Saulles.


The British Trade dollar was declared legal tender on 2 February 1895 by an Order of Council in the Straits Settlements, Hong Kong and Labuan (off the north-west coast of British North Borneo).

Three mints participated in the minting of the coins:


Although it was minted till 1935, the British dollar were demonetized with effect from 31st August 1904 in Straits Settlements. All Foreign silver dollar which were in circulation were replaced with the new Straits Dollars by Straits Settlements (coinage) order of 1903. It continued to remain as legal tender in Hong Kong until 1937, at the outbreak of the second Sino-Japanese War of 1937-45.