Unknown 7/13/2013 12:44:00 am
Long before the introduction of the British Trade Dollar, Queen Elizabeth I had command a new trade coins minted for trade by the Governor and Company of Merchants of London, Trading to the East Indies. In January 1601, the Portcullis Money were issued, 6,000 pounds sterling worth of Portcullis money was made at the Tower Mint. These were the first coins issued for the British Empire outside the normal coinage that were issued for England.


The Name “Portcullis” came from the crowned device that appears on the coin’s reverse. They were issued in Eight, Four, Two and One Testerne with the intention to compete with the Spanish "peices of eight" or 8 Reales. The four coins were struck to exactly the same weight and standard as the Spanish pieces.


In addition to Testerns, they are also known as Reales and Dollars and sometimes as Crowns with British fractions. Testerns was the term used in the Royal Warrent authorising their production.


The introduction of this coin is a failure. Traders in the East Indies did not want to accept these new and unfamiliar coins compare to Eight Reales that was already well-established. There are only thought to be less than two hundred surviving coins of which many are in museums. 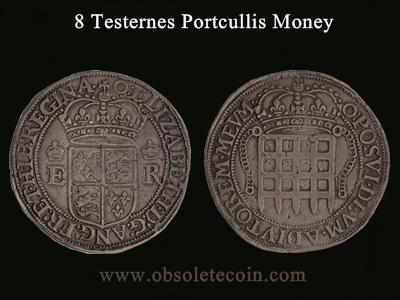 
Reverse: show the aforementioned crowned portcullis, together with the legend POSVI DEVUM ADIVTOREM MEVM (“I have made God my helper”), abbreviated down on the smaller denominations.

The Portcullis Money History Unknown 2013-07-13T00:44:00-07:00 5.0 stars based on 35 reviews Long before the introduction of the British Trade Dollar , Queen Elizabeth I had command a new trade coins minted for trade by the Governor...
East Indies
History
Queen Elizabeth I
Trade Dollar