Unknown 5/14/2016 06:26:00 am
In this article you can find information about 1962 1 cent keris Malaya & British Borneo Queen Elizabeth II coin value/price as a reference. The 1 cent coin issued by Board of Commissioners of Currency, Malaya and British Borneo during Queen Elizabeth II were released starting from 1956. In 1962, new 1 cent coins in Bronze bearing two keris (Malay dagger) on the obverse were introduced.


In 1961, Malaya is having a coin shortage because of the opening of rural area by Federation of Malaya and opening of several bank branches in the country. People in the rural area are using more small denomination coins.The government have ordered a new 1 cent coins from the The Royal Mint to solved the problem. 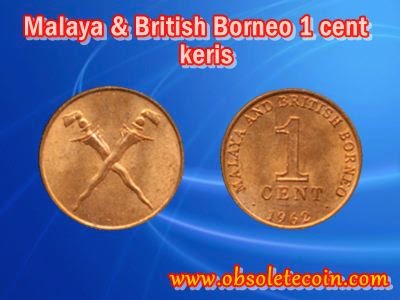